The History of the Belleville Guards began in November 1874; during an unruly coal miners strike. East St. Louis mine owners agreed to pay Union miners four cents per bushel.  Non-Union workers known as “Blacklegs” would work for three cents a bushel & mine owners in Belleville and Freeburg refused to pay four cents and brought in the blacklegs.

St. Clair County Sheriff James W. Hughes found himself with his hands full throughout the county, with the miners uprising.  On 10 November 1874; Sheriff Hughes, requested a shipment of arms from Springfield, and called for a one hundred man militia to be formed; and it’s volunteers comprising of former Civil War Soldiers.  Once the arms were received the Citizen Militia was sent to patrol the streets of Belleville, to assist the small Belleville Police force, so the Sheriff’s deputies could focus their efforts elsewhere in the county.  The militiamen were deputized during this ordeal and flyers were placed around the city, basically stating: Hostile actions will be met with hostile force.  Needless to report, with an armed deputized militia force patrolling the city, there was no further violence; and the strike subsided.

Following the end of the strike the militia force was disbanded by the Sheriff’s Department, they were paid $1.75 a day and $2.00 a night for their services.  However the militia remained intact, incorporating themselves as the “Belleville Guards”, in early December 1874; and began drilling.  Captain Casimir Andel was elected as their Commander, even know he wasn’t a candidate or at the meeting.  They adopted a similar uniform of the Union Soldier of the Civil War, a dark blue coat & pants trimmed bright gilt trimmings, with the addition of a leather helmet of Prussian design with a large polished brass pike placed on top.

The Belleville Guards, quickly became showmen appearing in numerous parades throughout the area, and highly regarded for their precision drills.  In 1876; they were placed under the command of the Governor of the State of Illinois as a National Guard unit; complete with their own armory; however they remained unregimented.

The Pullman Strike of 1877: Around 2 am on Saturday 28 July 1877; Sheriff Herman G. Weber received information from the Cairo Short Line, that a number of strikers in East St. Louis had taken control of a locomotive and were on their way to Belleville, loaded with an estimated 150 men.  Sheriff Weber immediately contacted Captain Andel; who activated the Guards for duty at once.  The Sheriff also contacted General William C. Kueffner, who was on the Committee of Safety; who quietly summoned a number of citizens.  The entire command of the Guards and Citizens were placed under the direct command of General Kueffner, who reported to Sheriff Weber; this command numbered about 200.  They immediately marched to West Belleville to provide a warm welcome for the stolen locomotive.

Kueffner positioned his men near the railroad station at Brandenburg’s Coal Mine; and turned the switch to derail the locomotive.  An advance scout was quietly “taken in” so not to warn the oncoming strikers, as the train was coming.  The engineer of the locomotive got close enough to notice the switch, he reversed the engine and engaged the locomotives brakes; before jumping from the locomotive, to high tail it into the woods.  Due to the speed of the locomotive, that caused it to jump the switch and continued some distance before crashing under a coal dump, while loosing its stack and the roof of its cab in the process.  The stunned strikers began to escape into the night, but were met by the Guards and militiamen; they elected to heed the warning to “Stand or be shot!”.  A total of 14 men were captured and arrested.  Upon there questioning the Sheriff learned that the objective of the locomotive raid was to capture the armory of the Belleville Guards.  The Sheriff instructed all the city’s saloons closed for the day & most businesses followed suit; as the general population of the city “wishing things were not as they were”.

Under direct orders from the Illinois Governor Shelby Moore Cullom: Captain Andel was to report with his Company and take possession of the “disorderly city”.  A mass meeting was held at the County Court House, at 10 in the morning, for a more thorough organization & the citizen militiamen were enlisted into duty with the Belleville Guards, under temporary duty and organized into Companies B through E; along with a Mounted Command.  The citizen militiamen who volunteered for the expanded Belleville Guards (are well known to this historian) came from former Illinois & Missouri Infantry regiments during the Civil War, and knew what they were doing.  General Kueffner continued to command the entire battalion. Once organized they joined Andel’s Company “A”, in East St. Louis; by Saturday evening.  With the Guards taking possession of East St. Louis; it allowed trains to move in and out of St. Louis; effectively ending the strike, in this area.  By Sunday night; the volunteer Companies of the Belleville Guards were dismissed.  Andel’s Company “A” remained in East St. Louis until Tuesday, 31 July 1877.  On that date; they were invited to march in a military parade in downtown St. Louis and a special train was made available for their use.  They were joined by the Bavarian Band of Belleville; and were complimented on their drill and appearance.  Afterwards, they passed a public resolution and had it printed in the local papers, thanking the Cairo Short Line for their kindness in furnishing a train, so they could travel to and from St. Louis.

After the strike, the Belleville Guards were regimented into the 11th Illinois National Guard; as Company A; Captain Andel was elected Colonel of the new regiment, again, he was not a candidate nor at the meeting.

One of the citizen militiamen who joined the Belleville Guards during the Pullman Strike; was Major Caleb H. Camfield; who commanded the Mounted Command.  He was born on 17 July 1834 in Augusta, Georgia; and served during the Civil War with the 29th Georgia Cavalry; and served extensively under Confederate Generals T.J. “Stonewall” Jackson and A.P. Hill.  Gustav Koerner described him as “a most soldier like man from Georgia, had been an officer in the Confederate army, and his body had been riddled by bullets”.  After the Civil War; he relocated to Belleville, as he was engaged in the cotton brokerage business with offices in St. Louis.  Major Camfield joined the Belleville Guards; and eventually commanded the Company after the departure of Captain Andel.

Major Camfield commanded Company A, 11th Illinois National Guard; until it faded into history for unknown reasons.  The Belleville Guards last known service to the community, as they were assigned the burial detail for the late Colonel F.K. Hecker in March 1881; in Summerfield, IL.  Gustav Koerner also noted in his memoirs about Hecker’s funeral and on Camfield himself: “It was a singular coincidence that Hecker, who even up to that time made war on all Southerners was taken to his rest by a guard of honor commanded by one of the stoutest Confederate Soldiers.”  To close the ceremony the Belleville Guards fired a military salute over the grave of the fallen Colonel, in the presence of the veterans of the 24th & 82nd Illinois Infantries.

During his command of the company, they continued to win many prizes for their well honed drilling demonstrations.  Major Camfield returned to Georgia in 1883; and resided in Albany, Georgia until his passing on 4 November 1906.  He was married twice and had one daughter. 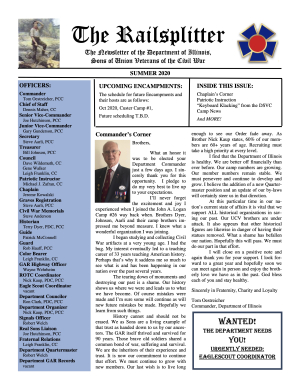 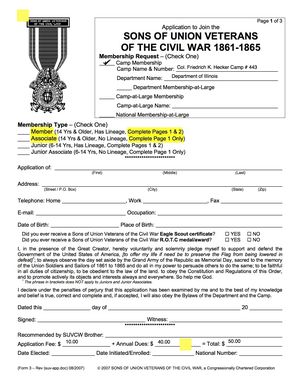 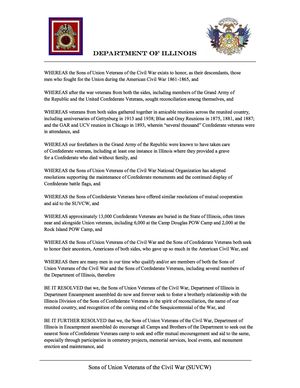 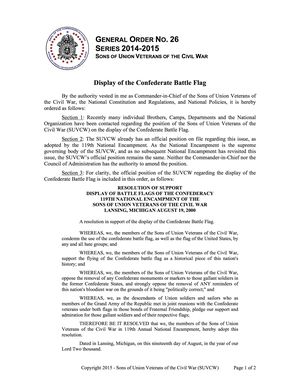 SUVCW and the Confederate Battle Flag